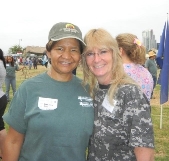 Jon Nachison, Ph.D., chief of psychology at Bayview Behavioral Health and Paradise Valley Hospital, founded Stand Down 25 years ago. It grew out of Nachison’s and cofounder Robert Van Keuren’s conviction that the overwhelming number of homeless veterans on the streets of America is unacceptable and that the veteran community itself must respond.

As a result of their efforts, more than 200 Stand Down programs modeled after the San Diego program have sprung up around the country—changing hundreds of thousands of lives. In fact, Stand Down San Diego was profiled on “60 Minutes” in 2010 and 2011.

“This annual event, supported by the Veterans Village of San Diego, is a reminder that these vets are part of something bigger than themselves, part of a community,” Nachison said. He is most proud of the veterans who have used the opportunity to turn their lives around, and then return each year as volunteers to support other vets.

It’s estimated that close to 110,000 veterans are homeless on any given night in America, with most of them battling mental illness or substance abuse. Roughly 25% of all the homeless and 33% of all the homeless men are military veterans. An increasing number of them are from the wars in Afghanistan and Iraq.

Jo Sortelli, manager of the Paradise Valley Hospital medical staff office, is a long-time volunteer. “I have been volunteering at Stand Down for 14 years,” she said. “It is such a life-changing experience for volunteers that most return year after year.”