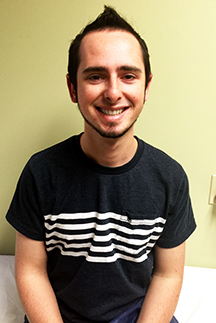 The irony was not beyond him. That Alec D., an accomplished 21-year-old practitioner of Taekwondo, was no longer able to bend his hips was like some cosmic prank–except for the intense pain.

Alec suffered from a childhood disease called slipped capital femoral epiphysis (SCFE) that became worse and more painful over time. It got so bad that he was no longer able to perform the complex kicks and quick movements that his art demanded. Even every-day, simple acts such as sitting down and getting up out of a chair became near impossible.

SCFE is a disorder of the hip that typically occurs in adolescents, more so in boys. It tends to happen more frequently in obese children or children who experience rapid growth spurts. For reasons that are not quite understood, the ball at the upper end of the femur (the “thigh bone”) slips off in a backward direction due to weakness of the metaphysis, or “growth plate.” This misplacement creates a bump or spur on the junction of the ball and neck of the femur, creating a hip or femoro-acetabular impingement (FAI). If left untreated, FAI eventually leads to early hip arthritis.

Alec came to see Dr. Harish Hosalkar about his condition. Hosalkar is the director of the Joint Preservation and Deformity Correction program at Paradise Valley Hospital, and he is very experienced in treating young adults with FAI like Alec. At the hospital’s San Diego Spine & Joint Center, Dr. Hosalkar performed a complex, two-stage hip preservation and reconstructive surgery on Alec, where he carefully removed implants from a prior procedure, and then “sculptured” the bones to restore the anatomy and morphology of Alec’s hips. The doctor also took care to repair the surrounding cartilage and labrum. Alec’s right hip in particular offered a challenge to Dr. Hosalkar. He had to perform a procedure called “allograft cartilage grafting” using preserved cartilage. “Without this surgery, I would have needed a hip replacement within a few years,” explained Alec. “Having this done has pushed back the need for that many more years down the road.”

The procedures were a success. After a few months, Alec is virtually free of the pain and limitations his disease caused him. After a bit of strengthening and physical rehabilitation, Alec is looking forward to once again practicing and teaching Taekwondo. “The following year I planned on taking a Taekwondo cultural and training tour through Korea and China,” says Alec. “I am very excited about this, and Dr. Hosalkar worked with me and made sure we had the surgery done the end of the year so I would be able to recover fully and go on this trip.”

The San Diego Spine & Joint Center at Paradise Valley Hospital is one of the most unique units in San Diego County. Based on healing design, the unit was constructed to resemble a seaside village with a boardwalk for therapeutic strolls and family-centered meals and lounge. Patients are encouraged to wear comfortable clothes from home and a guest can stay overnight with the patient upon request.